Present-day Languages of Pentecost Island, from “A Follow-up Analysis of Listener (Mis)comprehension across Language Varieties in Pentecost, Vanuatu” by Cindy Schneider and Charlotte Gooskens in this issue of Oceanic Linguistics. Image Source: Andrew Gray, 2016.

The summer issue of Oceanic Linguistics includes the following works:

Find the full text of the issue at Project MUSE 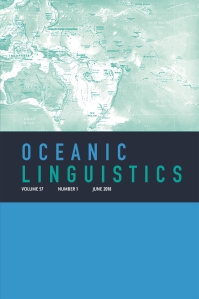 Oceanic Linguistics is the only journal devoted exclusively to the study of the indigenous languages of the Oceanic area and parts of Southeast Asia.

All submissions and editorial inquiries should be addressed to John Lynch, Editor, at oceanic@hawaii.edu.

Earlier this year, we unveiled a new cover for Oceanic Linguistics in the first issue of volume 56. The second issue of each year has the same design with an alternate color scheme.

The new covers of Oceanic Linguistics.

In addition to the new look, the December issue includes the following works:

END_OF_DOCUMENT_TOKEN_TO_BE_REPLACED

#LookItUP: Free Speech and the Media in UHP Journals

This is Part 3 in a series of University of Hawai`i Press blog posts celebrating University Press Week and highlighting scholarship published by UH Press journals in the past year. Read our introductory blog post here. Our hope is that this series will shed new light on how UH Press “sells the facts,” so to speak, and the value our 24 journals bring to our very existence. Links to each journal and article are provided below.*

Free Speech and the Media

Context: Published twice a year, MĀNOA features contemporary literature from Asia and the Pacific, often in translation. Volume 28 includes the work of author Zhang Yihe, whose novellas were banned in China and appear here in English for the first time. Charged as a counter-revolutionary in China, Yihe based her stories on the people she met while sentenced to 21 years in a remote labor prison. In 2017, MĀNOA was awarded $10,000 grant to pursue new projects in Burma and Cambodia from the National Endowment of the Arts, which is currently under threat of discontinued federal funding.

Context: Scholar Zhao Ma explores the process of a nation’s remembering and forgetting the bloodshed and fervor behind a war—in this case, China’s involvement with North Korea—when it is recast through state-run media and propaganda.

Article: “LD&C possibilities for the next decade” by Nick Thieberger

Context: As LD&C celebrates its 10th anniversary, editor Nick Thieberger takes a look at the journal’s downloads, Facebook following, and other statistics that have brought the open-access journal’s research to linguistics scholars across the globe, and wonders how new technology will change the field in the coming decade.

Context: This study on linguistics changes in Malaysia carries more weight than if it had been published in previous years. From the article’s introduction: “In our view, social network can be studied as a proxy of interlinked determinants of language maintenance or shift. Investigating the influence of social network on language choice would contribute to a holistic understanding of factors determining language shift.”

*Institutional access to online aggregators such as Project MUSE may be required for full-text reading. For access questions, please see the Project MUSE FAQ available here or contact your local library.

Established in 1947, the University of Hawai`i Press supports the mission of the university through the publication of books and journals of exceptional merit. The Press strives to advance knowledge through the dissemination of scholarship—new information, interpretations, methods of analysis—with a primary focus on Asian, Pacific, Hawaiian, Asian American, and global studies. It also serves the public interest by providing high-quality books, journals and resource materials of educational value on topics related to Hawai`i’s people, culture, and natural environment. Through its publications the Press seeks to stimulate public debate and educate both within and outside the classroom.

For more information on the University of  Hawai`i Press and our publications, visit www.uhpress.hawaii.edu. To receive table-of-contents email alerts for these publications, please click here to sign up at Project MUSE.

The new issue of Oceanic Linguistics is here (with a new look!)

Through the years: Oceanic Linguistics covers.

We’re thrilled to share this cover redesign with you. In addition to checking out the new issue, learn more about Oceanic Linguistics in this interview with editor John Lynch and peruse this free issue on Project MUSE detailing 50 years of Oceanic Linguistics history.

Plus more articles, squibs, and reviews

END_OF_DOCUMENT_TOKEN_TO_BE_REPLACED

In 56 years, Oceanic Linguistics has been led by only three editors: George W. Grace, Byron Bender, and John Lynch. Below, Lynch shares the journal’s history, how he managed to complete Vol. 54 in the middle of a hurricane, and how the journal has kept up with its expanding field. 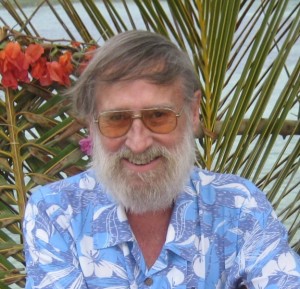 Oceanic Linguistics will publish its 56th volume this year. Tell us about the history of the journal.

OL was founded in 1962 on the recommendation of the Tenth Pacific Science Congress, held in Honolulu in 1961. The founding editor, George W. Grace, was then at Southern Illinois University; in 1964 he moved to the UH, and brought the journal with him. After 30 years as editor, he handed over to a colleague in the UH Linguistics Dept., Byron W. Bender, who continued as editor till 2007, when he handed over to me. (See Grace, Bender, and Lynch 2011. “The first fifty years of Oceanic Linguistics.” Oceanic Linguistics 50(2):285–311.)

Tell us about your journey to become editor of Oceanic Linguistics.

I had been an associate editor of OL since 1999, but that just consisted of refereeing the occasional paper. A cabal consisting of the two previous editors, two other UH faculty associated with the journal, and a linguist then at UH Press suggested to me that, since Byron Bender wanted to retire as editor, perhaps the editorship should move south of the equator — and I was their suggested nominee. I guess the fact that I am originally from Australia, have a UH PhD, have lived in Papua New Guinea and Vanuatu since 1970, and was about to retire was qualification enough.

In your field, what issues are particularly relevant now?

Two issues have remained relevant for many years. One is the historical interrelationships of the languages of the Pacific, both Austronesian and non-Austronesian, and the contribution of this study to wider Pacific prehistory. The other is the contribution that Pacific linguists can make to the general study of language and linguistic theory.

How has Oceanic Linguistics evolved over the years? Do you foresee any changes on the horizon?

The major evolution has been in terms of size: many of the early issue were 100 pages or smaller; the most recent issue, on the other hand, runs to almost 400 pages. The field has expanded enormously in the last half-century, and the pool of potential authors has expanded along with it.

Byron Bender served as the second editor of OL for 15 years, and now serves as managing editor. Source: UH Dept. of Linguistics.

Is there an issue that you’re particularly proud of?

I’m especially proud of vol. 54, no. 1, of June, 2015. Final copy goes from my laptop to UH Press for printing. However, as I was about to prepare the final files, Cyclone Pam struck Vanuatu — the most powerful hurricane in Vanuatu’s history. We were without water for a few days and without power for two weeks. My son purchased a tiny gasoline generator, which kept lights and refrigerator going … and allowed OL 54(1) to be produced to deadline!

Do you have any advice for those interested in submitting to Oceanic Linguistics? What are you looking for in future issues?

Two things: 1) Find a topic that is interesting to other people, not just to you. And 2) write simply and clearly.

Oceanic Linguistics is the only journal devoted exclusively to the study of the indigenous languages of the Oceanic area and parts of Southeast Asia.

All submissions and editorial inquiries should be addressed to John Lynch, Editor, at oceanic@hawaii.edu.

The 2016 science-fiction film Arrival features Dr. Louise Banks, who is called upon to communicate with aliens after they arrive on Earth. The linguistics professor, played by Amy Adams, is shown in this publicity still in her office full of linguistics books and journals, including Oceanic Linguistics!

According to “The making of a cinematic linguist’s office” on Language Log, the books in Dr. Banks’ office were borrowed from the film’s linguist consultants at McGill University, including Jessica Coon, Morgan Sonderegger, and Lisa deMena Travis (who published in Oceanic Linguistics Vol. 39 Issue 1).

Though set designers were less interested in titles than blue and beige colored covers, it’s great to see Oceanic Linguistics on the big screen. The current cover design (left) was launched in the journal’s fifth volume in the Summer of 1966, with a cover stock update (right) in 2009.

This year, Oceanic Linguistics will unveil a new cover for this longstanding linguistics journal that continues to grow with its field. Stay tuned for the new cover and an interview with editor John Lynch.

Posted on 10 December 2016 by Emily Benton | Leave a comment

END_OF_DOCUMENT_TOKEN_TO_BE_REPLACED 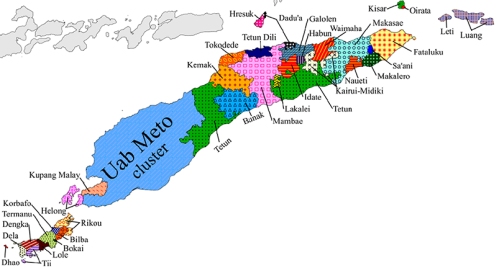 The location of languages of Timor, Map1 from the Oceanic Linguistics vol. 55 no. 1 article, “Parallel Sound Correspondences in Uab Meto” by Owen Edwards.

ARTICLES in Oceanic Linguistics Vol. 55, No. 1:

END_OF_DOCUMENT_TOKEN_TO_BE_REPLACED

View of the Constellation Mannap, Figure 1 from the Oceanic Linguistics vol. 54 no. 2 article, “East is Not a ‘Big Bird’: The Etymology of the Star Altair in the Carolinian Sidereal Compass” by Gary Holton, Calistus Hachibmai, Ali Halelayur, Jerry Lipka, and Donald Rubenstein.

Special this issue: In Memoriam

The new issue details the lives of two brilliant linguists. Robert Blust pays tribute to George William Grace (1921-2015), who became editor of the journal in 1962 and held the editorship for 30 years. Blust writes:

George Grace was never flashy, never one who sought out recognition, but he saw through the grand schemes of others who had greater ambition, rather like the little boy who saw what the emperor was really wearing, and stated it in plain language. He will be remembered for his broad knowledge of Oceanic languages, his trailblazing originality as a thinker, and his rock solid insights into the nature of language change.

Andrew Paley remembers Frantisek (Frank) Lichtenberk (1945-2015), who died in a train accident in Auckland this Spring, after a 40-year career of outstanding contributions to descriptive and comparative-historical research on Oceanic languages. Paley details Lichtenberk’s “rich legacy of achievements and good memories” in the issue. END_OF_DOCUMENT_TOKEN_TO_BE_REPLACED